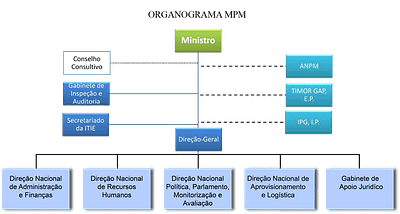 Ministry of Petroleum and Mineral Resources (MPRM) has two(2) National Directorates with one(1) Secretary EITI and also include Gabinete Minister From Office and under institutions three (3) are The National Petroleum Authority is Minerals (ANPM), Timor GAP – Timor Gas & Oil, EP, Institute Petroleum and Geology (IPG).

EITI Secretariat its function is to ensure transparency of revenue from oil and minerals.

National Minerals Directorate, abbreviated name for DNM with its responsible role is as the direction in which the role of control of the mineral wealth in Timor-Leste under the law and regulation less existed in East Timor.

The National Directorate of Administration and Finance, abbreviated name for DNAF with its function is responsible How Directorate that its role responsible for supervising and competirias in economic Administrative, a draft general budget of the state MPRM different financial contributions.